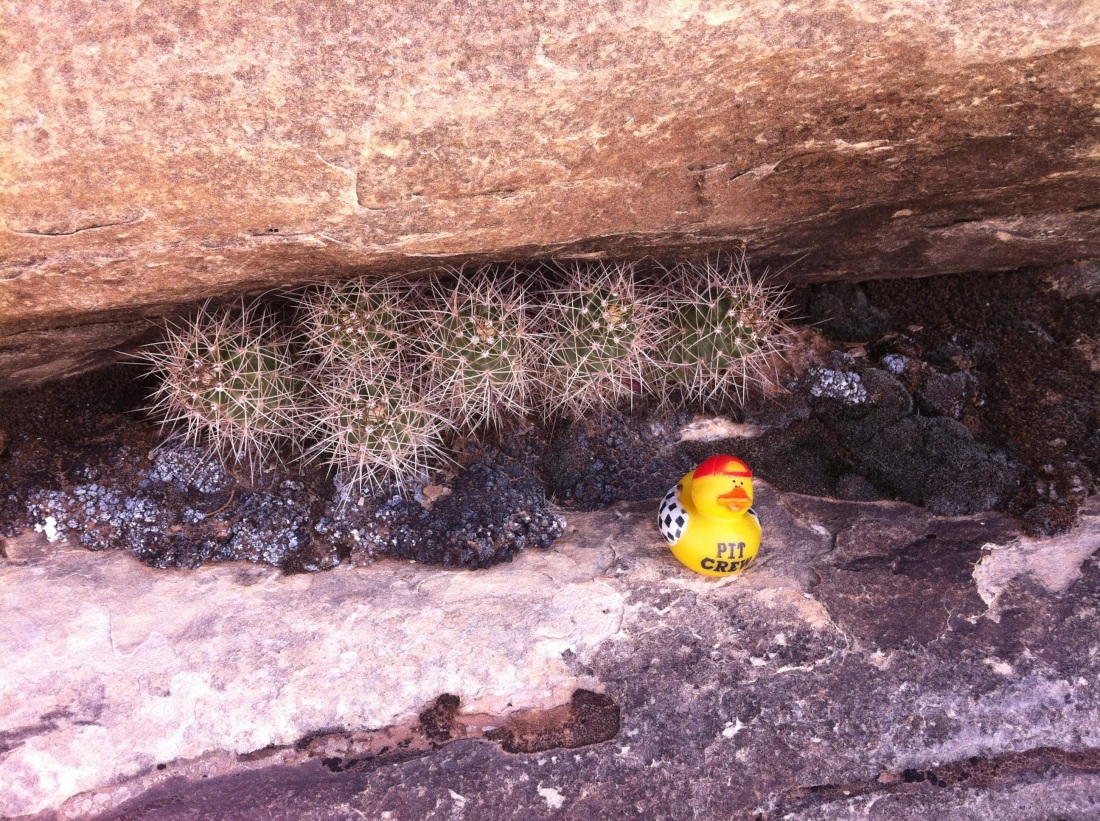 Last Fall, the Rubber Ducky Buddha of Joliet and I were hiking around Canyonlands. “Is this catcus hiding under this ledge with its weapons deployed fearful?”, asked Rubber Ducky.

I thought about it for a few minutes. With Rubber Ducky, strange questions never have an obvious answer, so you need to deeply ponder his questions. If I blurted out my instinctual answer, I would have answered “Yes”, been wrong, and that would have been the end of the lesson. As Ringo Starr says, “Why plahnt seeds where it cahn’t grow.”

So I prepared the garden of my mind for this lesson. Hmmm … OK … the cactus under the ledge redminded me of “preppers”, tucked away in the mountains living in fortresses they call home, lots of guns and ammo, lots of food.  They’re obviously afraid of something. That similarity is probably why I would have blurted out “yes” without pondering the question further.

But the cactus can’t make decisions like the preppers. The cactus are what they are and the preppers are humans with the power of design and choice. What would the nature of a plant living in a dry, hot desert among thirsty, hungry critters be? Well … it would be like the catcus tucked away under the ledge with its thorns. That’s just one solution to that question. Another solution would be to live in an air-conditioned home of a human who thought you were nice thing to have.

I asked Rubber Ducky if this lesson is about eliminating fear, to which he answered with the question, “Why would we want to do that?”

Me: Because fear is debilitating. You go off and hide.

RD: Is that it? Are rock climbers, MMA fighters, and skydivers fearless?

Me: Maybe they are fearless … or better yet, they’re brave enough to face their fears. You can’t deny their courage, whether they actually have something to fear or not.

Rubber Ducky deciding to save us a bunch of time: Here’s the punchline to this lesson: No creature on Earth is fearless. That is, no ant, no dog, no human. It doesn’t make sense to be fearless. Without fear, Life on Earth would fall apart. What if all prey stopped fearing their predators and just gave up?

RD: Yyyyyes … but what else? So they stop evolving … so … bigger picture … Earth would continue along its merry way over time, orbits changing, the axis shifting its tilt, continents moving, volcanoes erupting, meteors striking … What would become of Life on Earth, if creatures of Earth stopped evolving?

Me minutes later: The Earth continues evolving! But Life on Earth would be like a hermit clinging to his old ways as society around him changes, grows, impinging more and more on his solitude, eventually snuffing him out!

RD: The mechanics involved in this thing you think of as fear is actually fundamental to Zen. It’s the basis of the decision-making process of all creatures. For humans, it is a blown up decision-making mechanism.

The Eternal Fishnu later taught me that this fear thing started as simple heuristics – simple, quick and dirty, good enough rules. It’s a mechanism that can possibly spontaneously emerge within in a few short billion years. That is, as opposed to human-designed machines that would take way longer to pop up in that way.

For even smarter creatures, left or right upgraded into fight or flight. Can I take that bastard? For these creatures that mostly translates to: Is that bastard bigger than me? Yes, then fight. No, then run like hell.

For such non-sentient or low-sentient creatures, such as ants and fish, if they were wrong, they didn’t care because the aren’t aware of their own mortality. All that matters in that some percentage of them live to reproduce so the species – not that individual – survives. Remember, the reality of Life on Earth is that it’s a competition of species, not individuals. It just seems that way to we sentient humans because in a way we each are a species of one.

For the not-quite-as-sentient-as-humans-today creatures (such as dogs, apes, or even humans in much simpler times) this decision-making mechanism became much more sophisticated. The increased complexity of life has grown the list of choices to more than a binary decision of fight or flight and the factors to consider that are plugged into our decisions have grown way beyond whether something is bigger or smaller than you.

For these creatures, a new heuristic had to emerge, much more powerful but still rather simple. And that heuristic is: If someone else is doing it, chances are that it’s  good. What’s great about this heuristic is that it doesn’t require great intelligence to purposefully come up with better ideas. One lucky individual could simply accidentally stumble upon something that works – and many of the greatest “inventions” are accidental, then it spreads like the plague, only it’s just an idea, not a virus/bacteria. See Mimetic Theory (Mimesis) to dive deeper into this very intriguing notion.

Today, with seven billion people in the world, instant communication, global-scale commerce, “fast-food technology” (everything providing instant gratification), way enough food, there are just too many things for us to copy. How many really neat things are going on out there? So many things to catch our attention because they seem fun, or things we should be doing, or things we should be avoiding. We sentient humans are plagued with desires, all because of this web of competing fears of missing out on multiple things because we have just one body. Our new heuristic has reached its limit, unless we like being pulled in every direction and constantly tortured about what we should be doing. That’s Dukkha to a degree not existent in the Buddha’s time when he thought that was bad!

So that’s the rough story of Fear and Dukkha, give or take a few liberties with the facts. For humans today, it’s a relentlessly churning world out there where hiding under a rock ledge with our weapons pointing out isn’t a plausible long-term option. It’s a fine option for the cactus in the photo above because it has no goals, it has no desire to be anything other than what it is and doesn’t know to care about how its life will play out. It just does what it does in real-time response to what is presented.

So what’s the answer? The only genuinely fearless critters are the truly Enlightened. The Enlightened have no fear because they have no goals, yet they play their part – just like the cactus in the photo above. The only real difference between a human and the cactus is that we get to make choices about the part we play, even though we don’t have much say about the script. The cactus can only be a perfect cactus, nothing else.  They are 100% accepting of what is now because there is only now, the past and future are just ideas in our heads.

Becoming bigger is the way the unenlightened (that is, almost everyone) tries to deal with fear; richer, bigger, more powerful, more beautiful, more muscular, more talented, bigger car, bigger gun, more whatever than the next guy. It’s just a manifestation of that primal heuristic that is still in us – bigger is stronger. By hoarding these qualities, we believe we’re fortifying our hold on what we cling to, but it’s all just deodorant masking our fear.

You begin by emptying your cup – empty your mind of all that you know, all that you believe … all that you defend. Replace your “NO FEAR” bumper sticker with “no pride” … hahaha. Start with a 7-Day Bodhi Day Season.