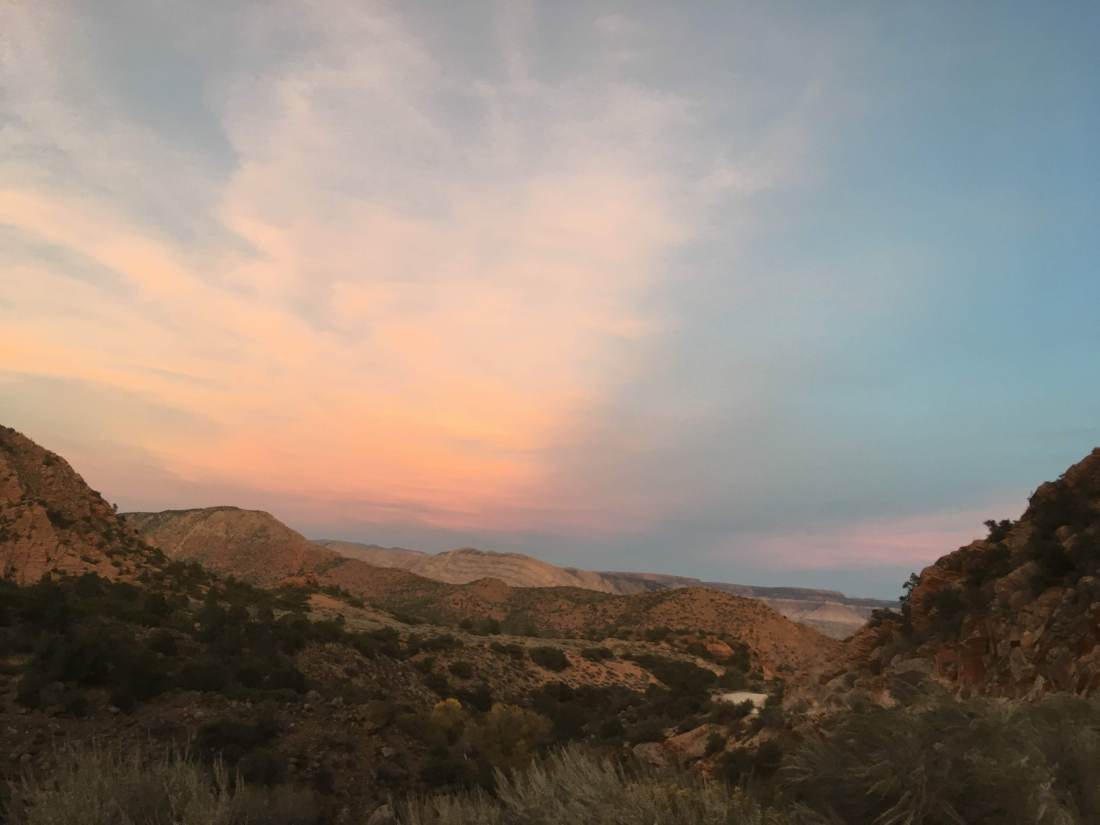 The Universe provided a wonderful sunset picture for our last venture of the sabbatical. Rubber Ducky, who I found in Joliet and who is now enlightened, sensed the air of sadness in the car and said that this is the harder part of Dukkha to grasp. It’s easier to understand the “bad” aspects of clinging such as grudges, the torture of jealousy, or a phobia. It’s harder to understand that we experience Dukkha even during times we feel happy, even enlightened. It’s easy to be happy in the warmth of a place such as Zion with friends you feel you’ve known forever but have only known for a couple of years or a couple of weeks. But we know the time is coming to pull off the warm blankey and walk out into the cold world. Even when things are good, we know it’s temporary and try to run backwards in time to avoid going out that door!

So when is there not Dukkha?! It’s when we realize that there is no good and bad, just One. Good and Bad are our human-made categories. We call ourselves sentient creatures, but we are only sentient enough to be dangerous to ourselves. Life on Earth is an organism in the Universe. To it, each creature, human, prickly pear, chicken pox virus, is to us like a cell or bacteria of our body. Life on Earth is in reality just a massive number of replicating molecules which periodically replicate with a slight error. These replicating molecules relentlessly replicate, but they don’t “strive to” replicate as we strive to become financially wealthy. They “strive” no more than a clock strives to tick along – the clock just ticks along because it is a simple machine that “just does”. What we humans see from our vantage point, the chaos we try to tame in our daily work, is complexity built on top of this simplicity.

Over hundreds of millions of years, those replicating molecules grouped together into progressively complex objects – viruses, bacteria, plants, animals – life. Because these molecules relentlessly replicate, life changes like a big kaleidoscope. That means old patterns yield to new patterns. This works so well that Life on Earth is over three billion years old. It withstood countless meteor strikes, life-threatening patterns such as Snowball Earth, and maybe a species that is a little too confident in themselves. This beautiful kaleidoscope called “Life on Earth”, where patterns come and go in unpredictable ways results in this sort of immortal “being”. There is nothing good or bad about a pattern being squelched out by others – that’s what this beautiful Life on Earth is.

But when a species called homo sapiens became self-aware, they saw that just about every creature on Earth makes its living devouring another creature in very gory ways. Being self-aware, they know that they and their loved ones will eventually be devoured. With their symbolic-thinking powered intellect, they devised processes to avoid being devoured. Things that added value towards that goal were deemed “good”, things that didn’t were deemed “bad”.

“What kind of sadistic God set up such an awful system?”, we should think. But that good and bad are just our little human definitions, as half-baked sentient creatures not sentient enough to see beyond our own minute corner of space and time. But just because we can’t see beyond our minute corner doesn’t mean there isn’t anything else.

From birth, our brains are wired for playing our human part in this cause to transcend Life on Earth. Our human brains can see beyond this, but we must first “empty our cup” of that. We are all like North Koreans indoctrinated with Dear Leader’s insanity, but that there is a much bigger world out there with great stuff going on. Similarly, there is a much bigger Universe than our human endeavors.

There is no good or bad, there just Is. And true understanding of that is the elimination of Dukkha, and the key to Enlightenment. Like any work in progress, a painting, software, we’re in an “ugly stage” of our evolution, caught between being creatures of Life on Earth (a creature of the Universe) and creatures of Humankind. Enlightenment isn’t magic like tapping into a supernatural power, but removing the bindings, which are just neural connections in our brains, allowing us to flow again, re-engaging us in the bigger picture. Well, that’s what Rubber Ducky says anyway …